AMNA NAWAZ: From Star Wars to 1970s TV shows, the promise of a bionic limb was always the stuff of science fiction. Now it's real. From PBS station WGBH in Boston, Cristina Quinn introduces us to a woman who's helping local researchers perfect the technology.
CRISTINA QUINN: Morgan Stickney approaches physical therapy at Spaulding Rehab like everything in life, with her eyes on the prize.
MORGAN STICKNEY, Swimmer: I like to treat P.T. and O.T. as if it's a workout. So I go down there and give it my all.
CRISTINA QUINN: She's a pre-med student, an elite swimmer, and a one-time Olympic hopeful. But she has suffered for years from an extremely rare vascular disease that went undiagnosed. It restricts blood flow to lower limbs, resulting in brittle bones.
MORGAN STICKNEY: I was trying to take my classes on opioids because I was suffering in so much pain. All my bones in my feet were dying. So, I couldn't walk.
CRISTINA QUINN: Facing amputation, she learned about an experimental surgery happening at Brigham and Women's Hospital in Boston. The Ewing amputation, named after the first patient to undergo the procedure, reconnects the muscles and nerves that communicate with the brain. It's a major advancement compared to a standard amputation, which severs these connections, says surgeon Matthew Carty. 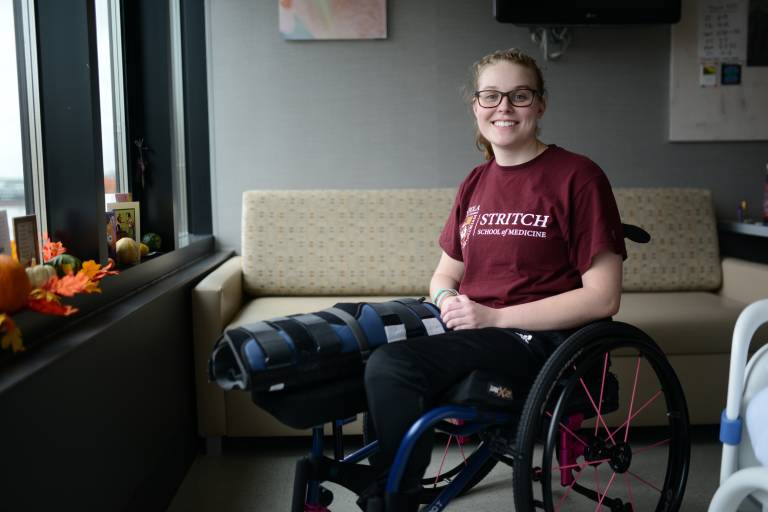 DR. MATTHEW CARTY, Brigham and Women's Hospital: When a patient with a standard amputation thinks about moving their ankle, which is no longer there, for example, they only get half the information. And so the brain searches for a way to process that incomplete equation.
CRISTINA QUINN: The Ewing amputation closes the loop, so, when an amputee puts on a prosthetic limb, the brain knows exactly where that leg is, because the muscles and nerves are still intact.
DR. MATTHEW CARTY: And the idea is that, once they have healed, when they fire off those muscles and think about moving their ankle, their body basically thinks it's moving a biological ankle still.
CRISTINA QUINN: Carty has been working with researchers at the MIT Media Lab, who are developing what is essentially a bionic leg. And Stickney, who underwent A Ewing amputation a year-and-a-half ago, is among the first to help MIT researchers test it out. She's moving a robotic ankle just by thinking about it. It's a potential game-changer for anyone who uses a prosthetic limb. But for Stickney, the immediate payoff off of the surgery was being pain-free and returning to competitive swimming. Months after her amputation, Stickney won two national championships and was living in Colorado training for the 2020 Tokyo Paralympics. But a few months later, the rare vascular disease affected her other leg.
MORGAN STICKNEY: I was recovering in the cold tub, and I got out and hopped three steps, and my foot fractured.
CRISTINA QUINN: Stickney has since become the first person to undergo a bilateral, or double, Ewing amputation. She's part of a small, but growing group of pioneers helping perfect this new technology. In the meantime, though, she's already thinking about restarting her training regimen.
MORGAN STICKNEY: Nothing will stop me from getting in the pool. My goal is to go to the 2024 Paralympic Games. I will be in a different classification this time. But that doesn't change anything. I'm going to be working just as hard in the pool, if not harder.
CRISTINA QUINN: Proving loss can fuel one's competitive spirit. For the PBS NewsHour, I'm Cristina Quinn in Boston.